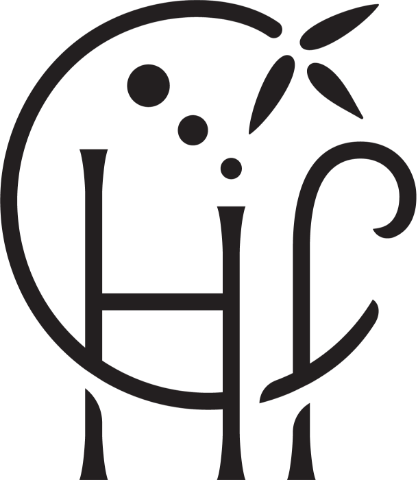 If turn of the century building materials and old relics could talk to each other, the place would be a chatter box. “Time” is represented in the constitution of this place.

a note from your tour guides

The tour could expand all over the venue and there would always be a story to tell about each and every element. Please bear in mind that the creation of Cherry Hollow Farm is not just a narrative of sheer determination and a “no guts, no glory” run at something. It’s much, much more than that. It’s about salvaging and displaying the very elements of what our country is all about so they are not lost to antiquity forever. And it’s about repurposing materials destined for the smelters and landfills and redefining space while recognizing the slightest contraptions as being artistic in their own right. Our place is a myriad of backdrops, unconstrained by a need to fit into a theme.  It is what it is. Honestly, Cherry Hollow Farm is what it means to YOU.

We earnestly hope you will “dig this place”, that you will feel at home while you are here, and as time goes on, we get to visit with you again.
Carter and Laura

If you are standing looking up at the massive arches of the promenade, realize that those 9,000 bricks staring back at you came from one of the first buildings where the cotton gin inventor Eli Whitney first produced the cotton gin.   And if you walk through the next arch and look right, you will see brick hand- made by slaves in the 1820’s.  Step back inside the promenade and look down at the dark black flooring.   The only reason we were able to acquire this 400-year-old flooring is because of a fatal train derailment in Graniteville, SC that set in motion the ultimate downfall of the Pell City/Allendale Mill.   That’s a long story.  Better to tell it over a fire with a drink in hand. 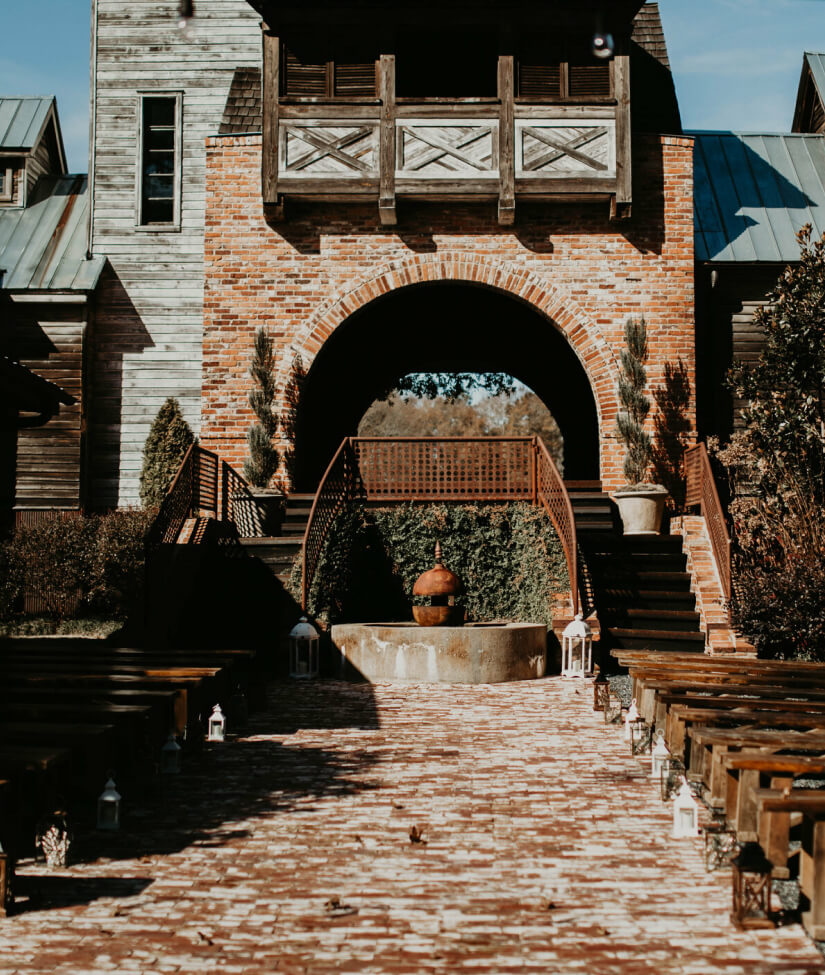 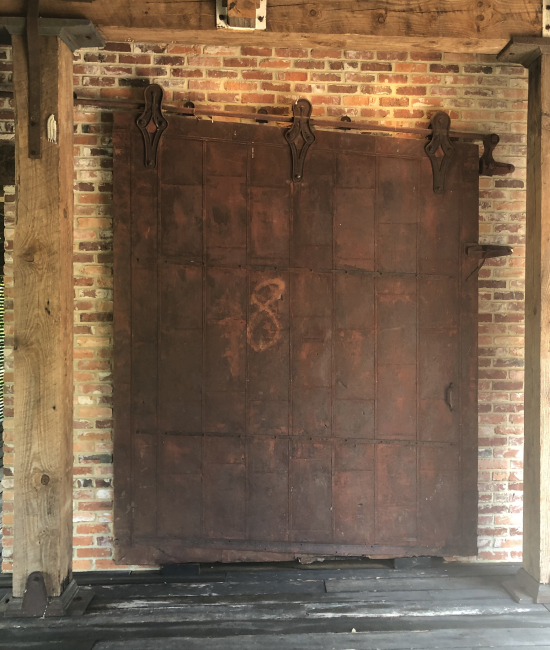 Of particular historical interest is the very large, burnt red steel clad warehouse door that is placed against the eastern wall of the promenade.  This very large wooden and steel clad door is perhaps one of the most treasured elements of Cherry Hollow Farm for it represents a contentious time in American history.   This door, extracted from one of the oldest cotton mill warehouses in Selma, Alabama was one of a few others that opened and revealed recently arrived slaves that had traveled up the Alabama River to be sold into bondage.   That old mill, which has since been demolished is but an earshot from the Edmund Pettus Bridge, hallowed ground indeed for the civil rights movement.   It was our desire for this historical element to grace Cherry Hollow Farm, to change its paradigm from representing the disunion of our country and the bondage of our people fast and instead to the union of families and the harmonious marital alliances of people from all nationalities, backgrounds and orientation.

Looking up through the center of the promenade, one can see a mortise and tenon beam that forms the ridge of our main structure.   This beam, one of only three in existence, came from The Huntingdon Plantation (circa 1821) built in Autauga County, Alabama by John Archer Elmore (1762-1834), a distinguished military officer and politician who fought in the Continental Army in the American Revolution.  John Archer Elmore fought alongside Nathaniel Greene, considered to be George Washington’s most dependable and gifted officer and was present at the surrender in 1781 of the British under command of Charles Cornwallis, 1st Marquess Cornwallis to French and American forces at the Siege of Yorktown.  This battle effectively ended hostilities in North America.   We found it most fitting that this beam become the backbone, so to speak of Cherry Hollow Farm as its history was engrained in the very fabric and foundation of our country. 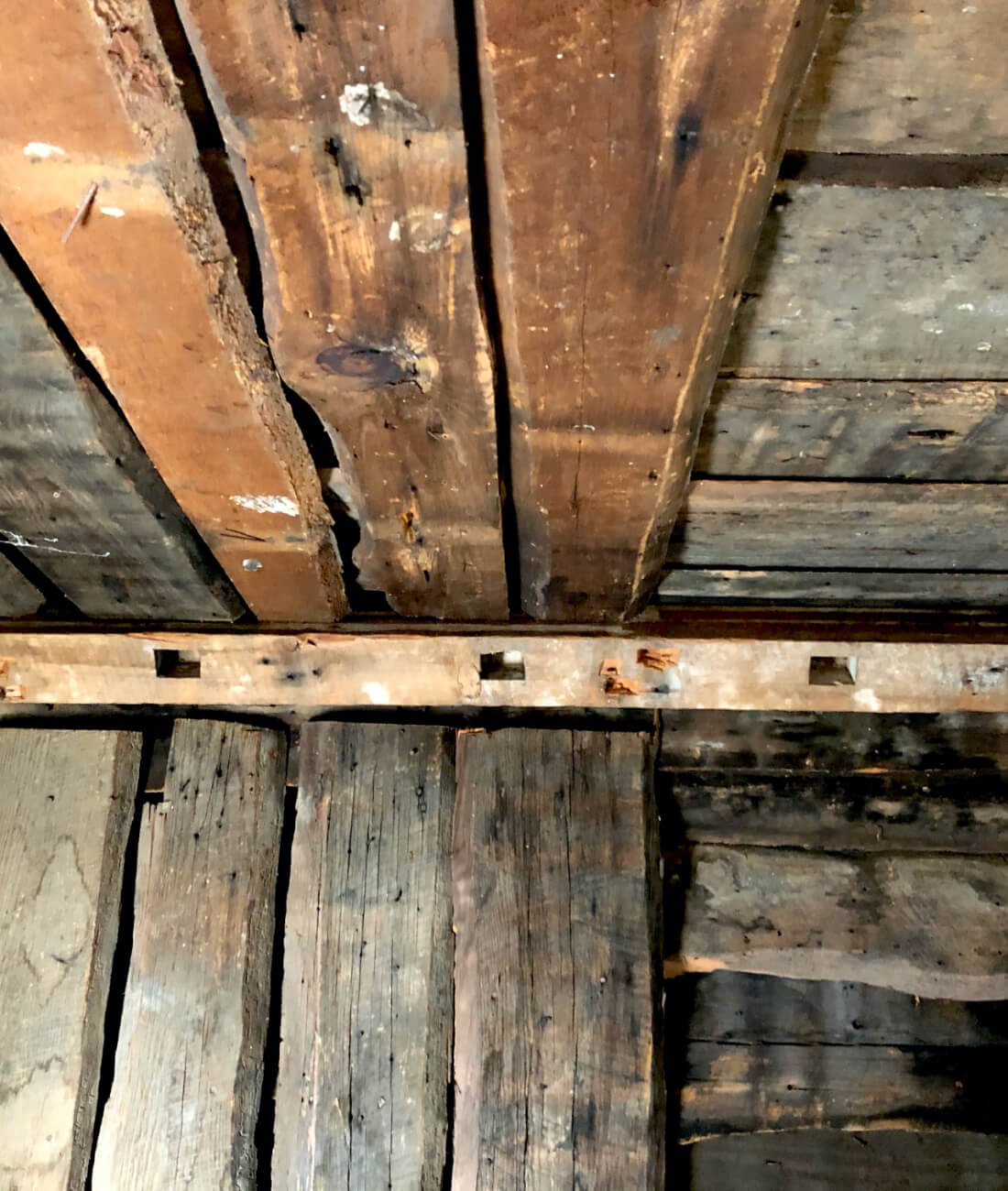 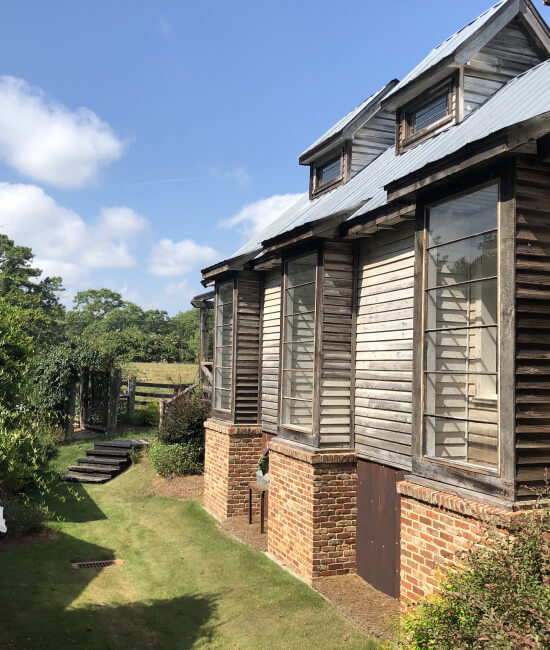 The two very old structures that straddle the promenade are actually two sections of the old Carmichael estate built in 1860 that was donated to us from a very respected landowner near our farm.   The first owner of this house fought in the civil war and was involved in the relocation of the Creek Indians to reservations out west.   This old farmstead was moved in two pieces from its previous location three miles down the road to where they rest now.  It was a massive undertaking but absolutely necessary in that we saved one of the most historic structures in Chattahoochee Hills.  What we now use as the chapel and dressing rooms was once the front of the house and the dining room, kitchen and a meat smoking/salt curing room.

This heavy steel ball was the lightning rod for a titanic steel water tank for the Sargeant Mill in Newnan, Georgia.  For those who know your history, the Sargeant Mill was one of the first mills in America to hold a strike over workplace conditions, wages and child labor.   This uprising and the violence that ensued was the catalyst that led many other textile mills in the country to strike and propelled organized labor and unions throughout the country to action. 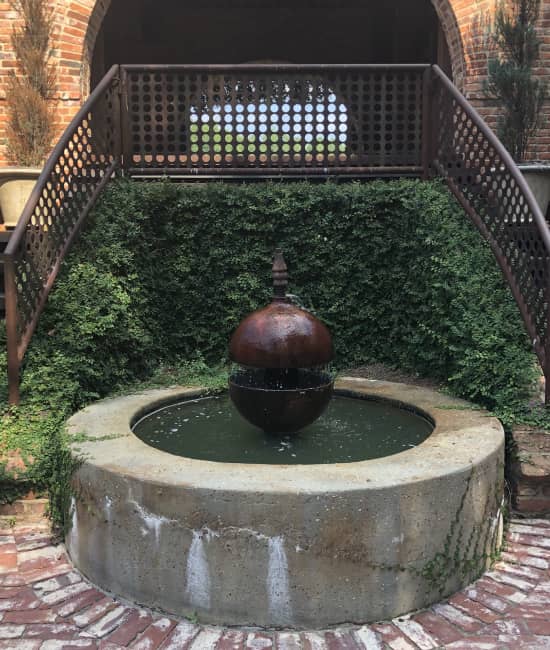 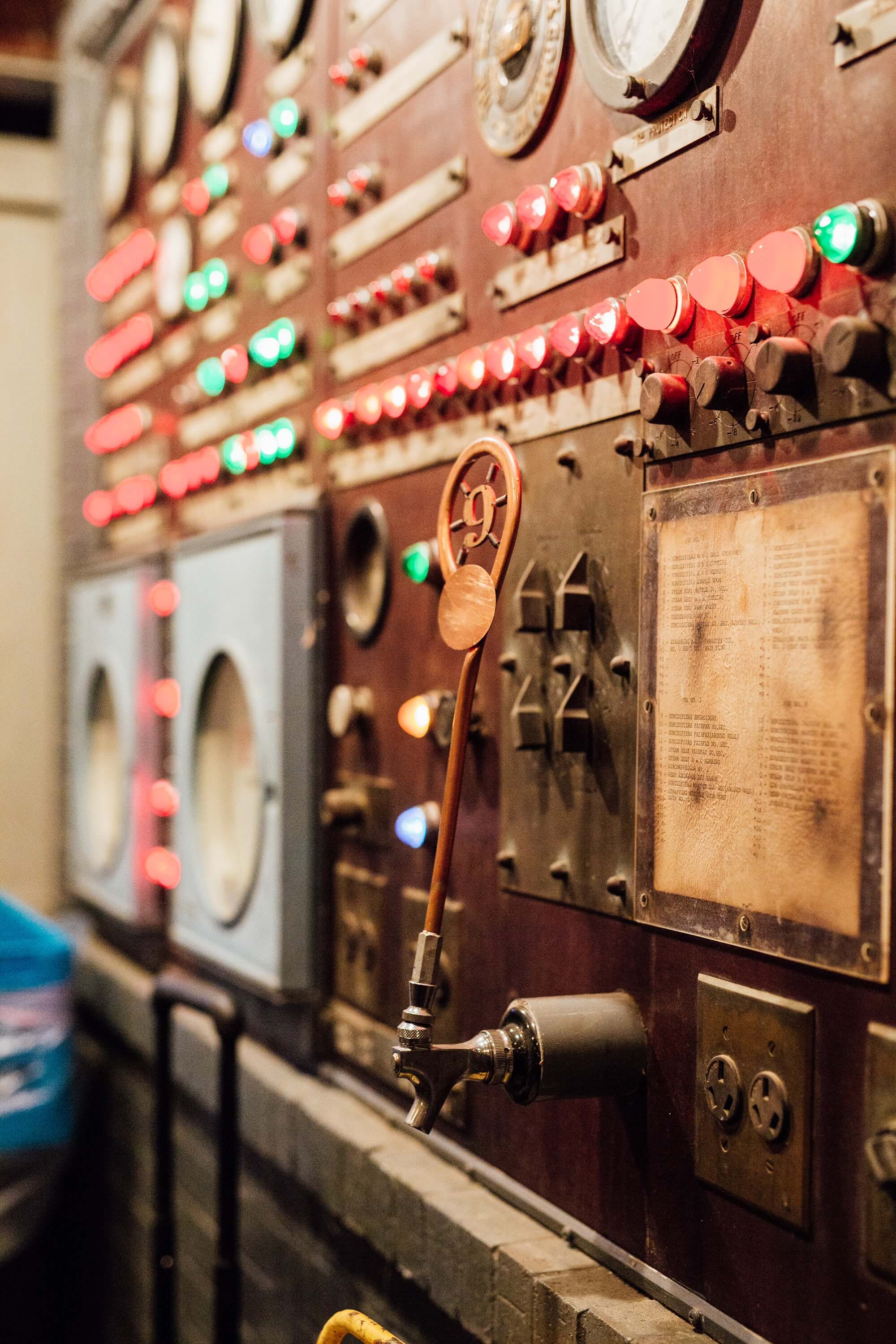 This control panel came from the Fairfax Mill, found almost by accident in the very bottom of that large building.   Located only 12 hours before it was slated to be crushed by an excavator, it took us 4 hours to extract it and many, many more hours to reinstall and bring it back to life.  I’m sure the engineers who worked that panel never thought it would ultimately find its way here.  There are a variety of other gauges and electrical panels in the bar that herald from the Opelika, Griffin and Lanette Mills and even a control panel from a Huey helicopter that flew in Vietnam.  This panel, while not exactly in context with the others has sentimental value.   It just had to go there.

The Babcock and Wilcox (B&W) boiler doors came from the Opelika and Griffin Textile Mill’s boiler buildings.   The main boiler door covers the fireplace that vents up through the old poultry feed silo outside that we found near Wedowee, Alabama.  How many people can say they have vented their fireplace out through a poultry silo?!! 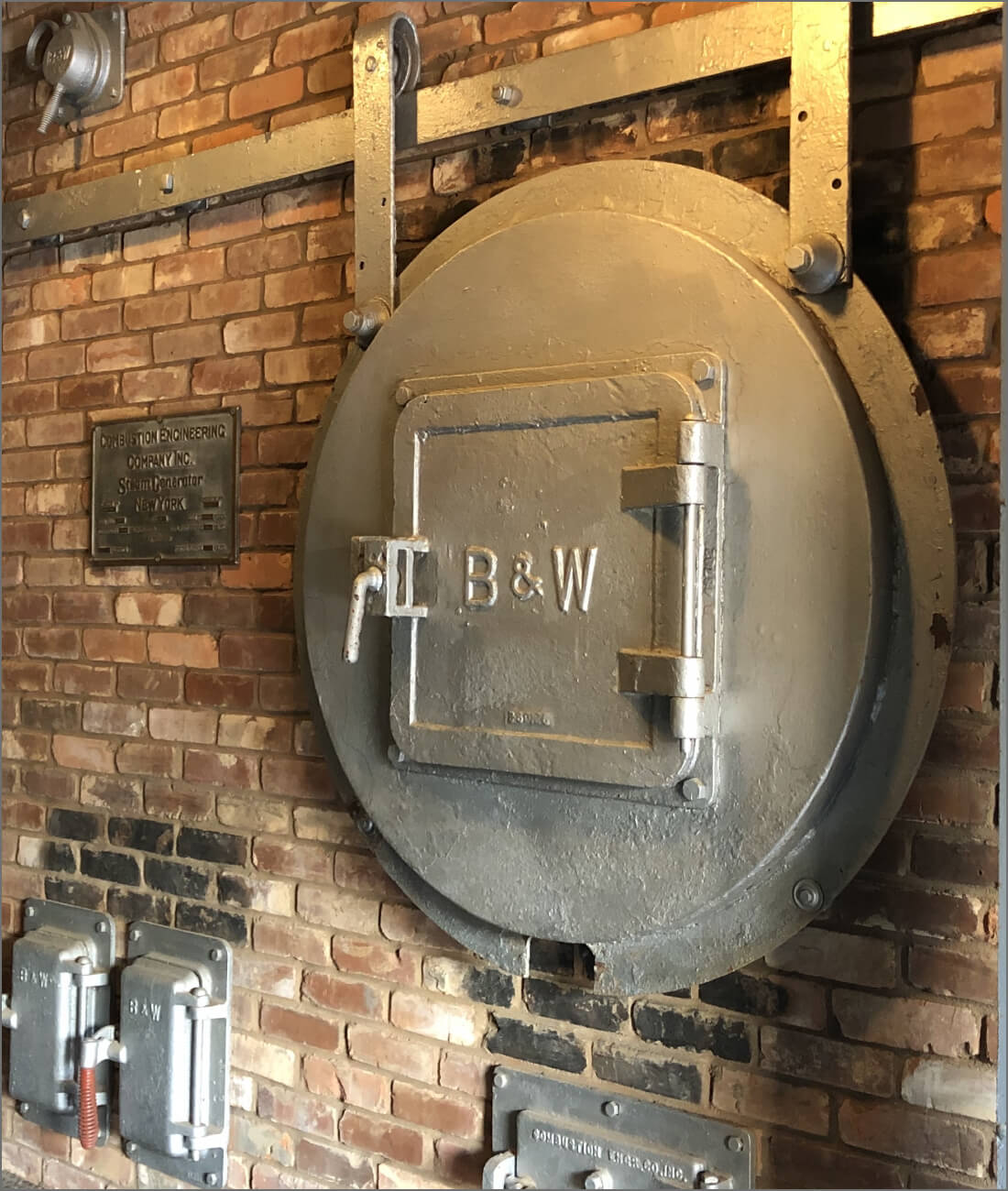 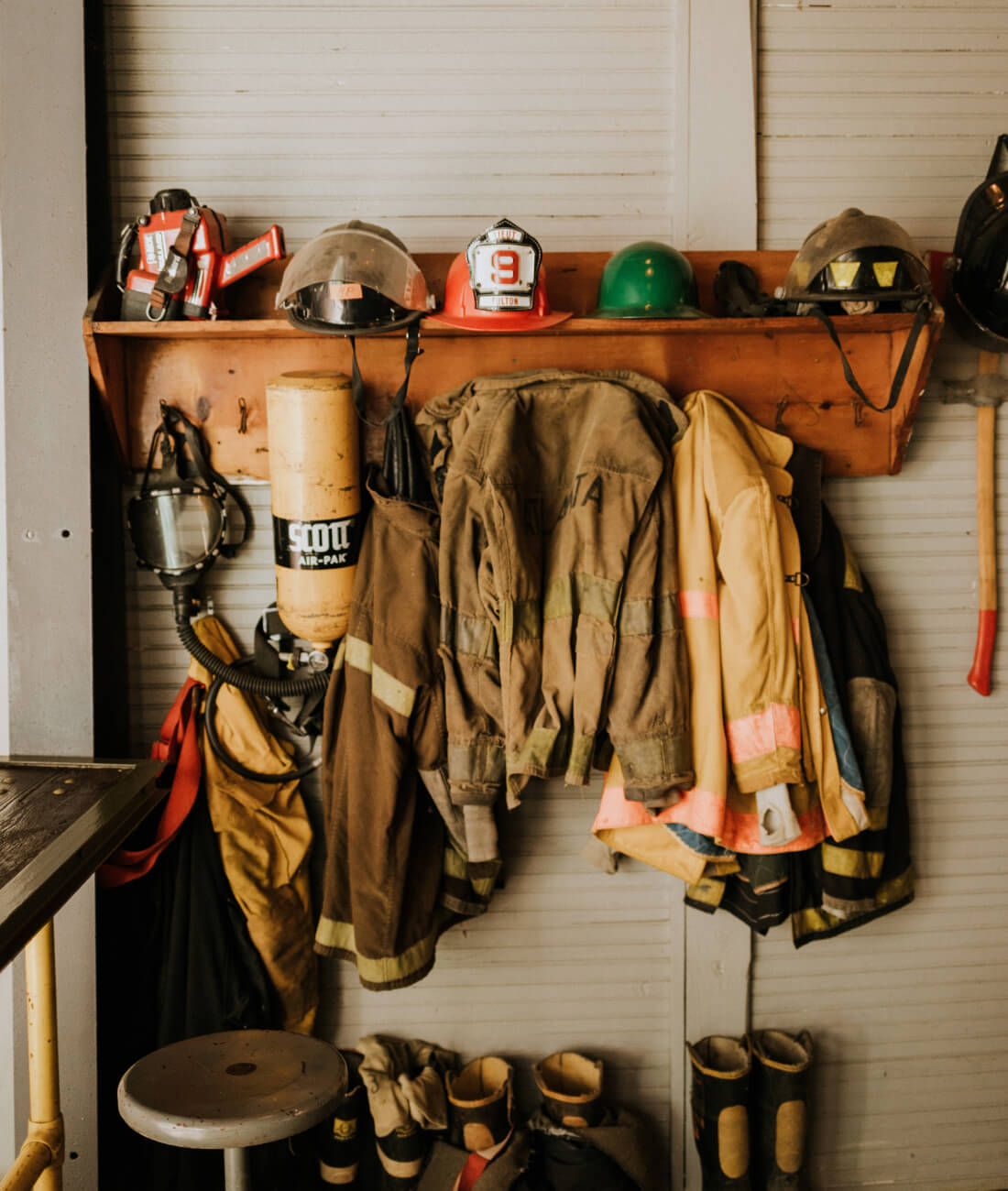 The rack holding the firemen’s uniforms is a testament to the sacrifice of our fireman and in particular to our friend and consummate master electrician who helped us bring this place to fruition.  The very small lit room right behind the bar holds a Level A emergency responder suit and other equipment as a testament to emergency responders everywhere and to the sacrifice of our family who have dedicated our lives to the environment and to the United States Environmental Protection Agency (USEPA).   Laura’s mother was actually one of the first 50 staff members of the USEPA.

The large, steel boiler door at the end of the dining hall is one of only two in existence. This boiler assembly formed the face of one of the old steam boilers that powered the Arnco Mill from 1929 until the 50’s.   To tally up the hours that it took to find, dismantle, extract and reconstitute this boiler door into its present location would be gargantuan to say the least.  It was by far one of the most arduous projects we undertook. 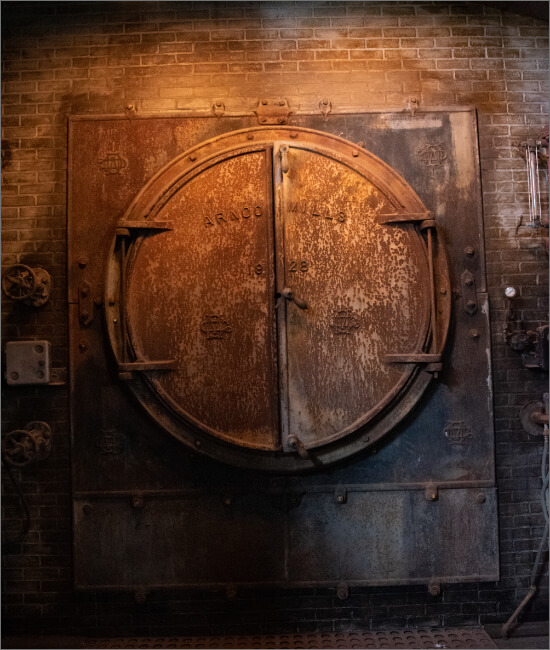 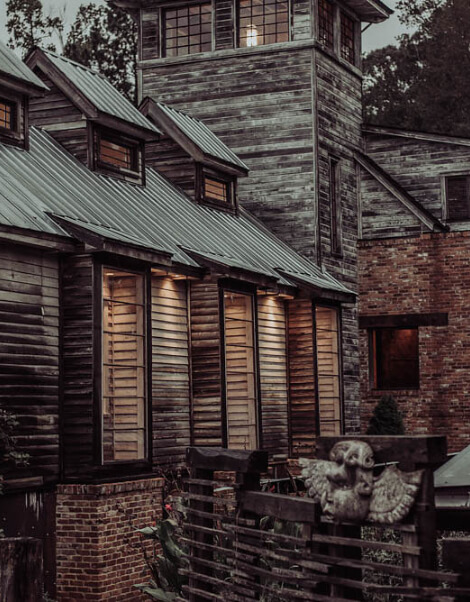 Inquire
about your event

*COVID 19 -  Our venue is perfectly suited for socially distanced events. There are a variety of outdoor gathering spaces for you to choose from as well as indoor spaces complete with large sets of doors that can be opened up to create cross ventilation.

follow us on SOCIAL
Behind the scenes at Cherry Hollow.
Events, special guests and more.


find your way AROUND